How do you type numbers though?

Having spent a week back on a "normal" 65% board, I have concluded that these tiny, weirdo split boards are the best and I'm probably done exploring keyboards for now.

The main reasons for this conclusion are:

There's a steep learning curve though. When I first started on split, column stagger keyboards (a 3x6 crkbd), I did hours on keybr.com until I was proficient with it. Once I knew where everything was, I moved to monkeytype.com to practice typing real words.

It wasn't for a long time that I was comfortable enough to start thinking about using something like this for work, and it wasn't until I moved down to 3x5 and really concentrated on personalising my firmware that I did that. It wouldn't be possible without the Miryoku approach.

Miryoku is based on the concept of layers, which I have written about before. The easiest way to think of layers is in terms of how the shift key works. When you press "a", you get an "a". When you press "shift-a" you get "A". With a layer, pressing one of your layer keys and "a" might get you a "[" or a "/". And that's it.

Another important concept in Miryoku is mod and layer tapping. Your mod keys (ctrl, alt, cmd, shift) rely on holding a key down whilst tapping another. If you tap them, they don't do anything. So what if, when you tapped "a", it made an "a", but when you held it it worked like left ctrl? Windows users might be thinking "OK, how do I ctrl-a then?" and my answer for that is "when I hold ', that acts like right ctrl" - homerow mods only really work when they're symmetrical, so you don't get these issues. The only thing to learn then is thinking ahead to which mod shortcut you need so you know which hand to press mods on. It doesn't take long for your frequently-used combinations to become second nature.

The only exception here is shift. Sometimes you need to type WHOLE WORDS IN CAPS, and this becomes incredibly flaily when you have to constantly switch which hand is using shift. Caps lock is a pain, so I also have a mod tap on escape so I can have shift on thumbs and type whole words in caps when I need to (this is used quite a bit in programming languages; more than in general writing/messaging/email).

That's all very well and good, but how does it land in practice? Here's a carousel showing my maps and what I need to do to activate them. Some people go way more minimalist than this, but I've found this approach works very well for me. My accuracy when typing on this layout is incredibly high when compared to a normal row-stagger board.

I just made this carousel thing today, and I have been kinda lazy with it. If it doesn't work for you and you feel like it should (i.e your browser is up-to-date), I would be grateful if you'd let me know some details of your setup. 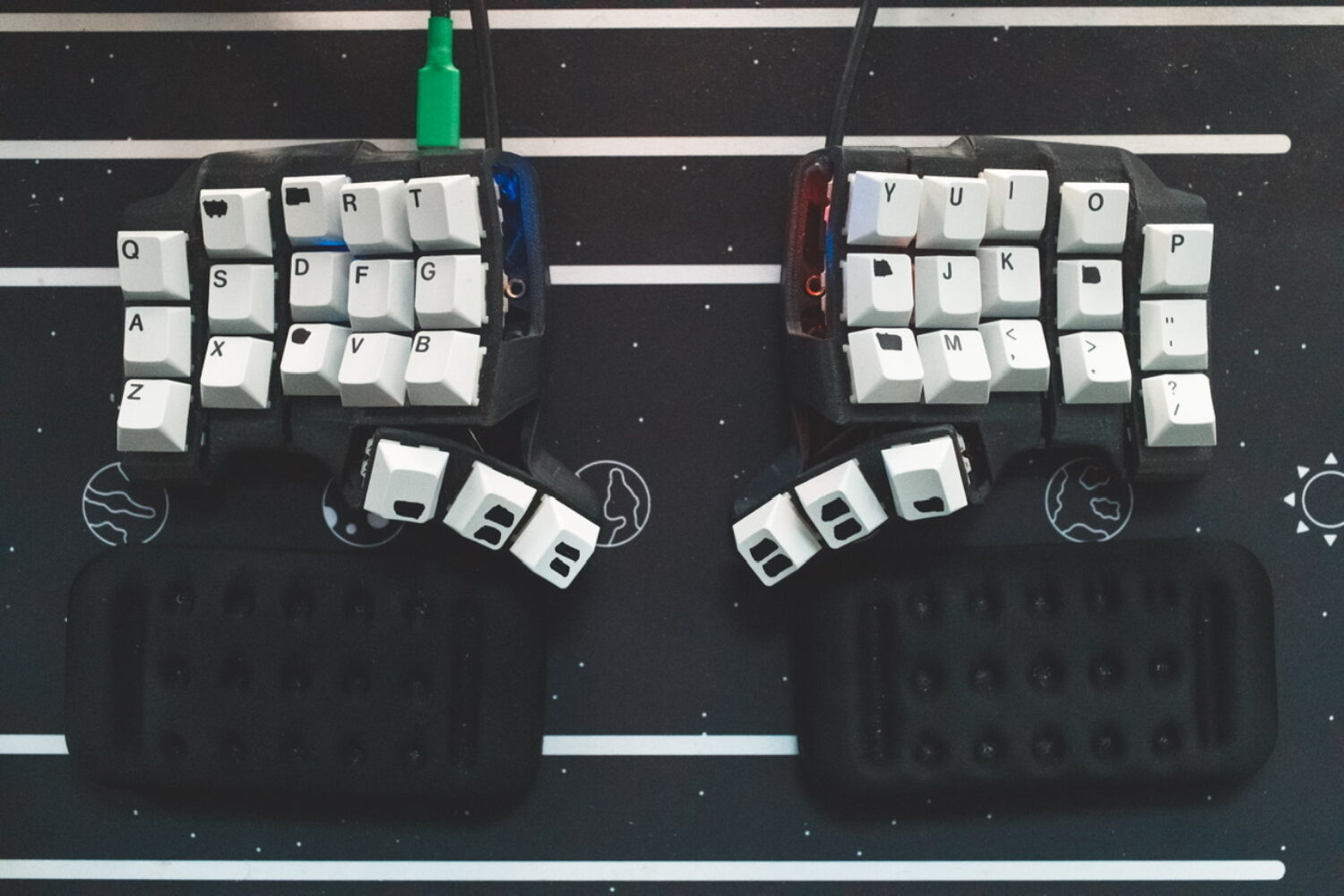 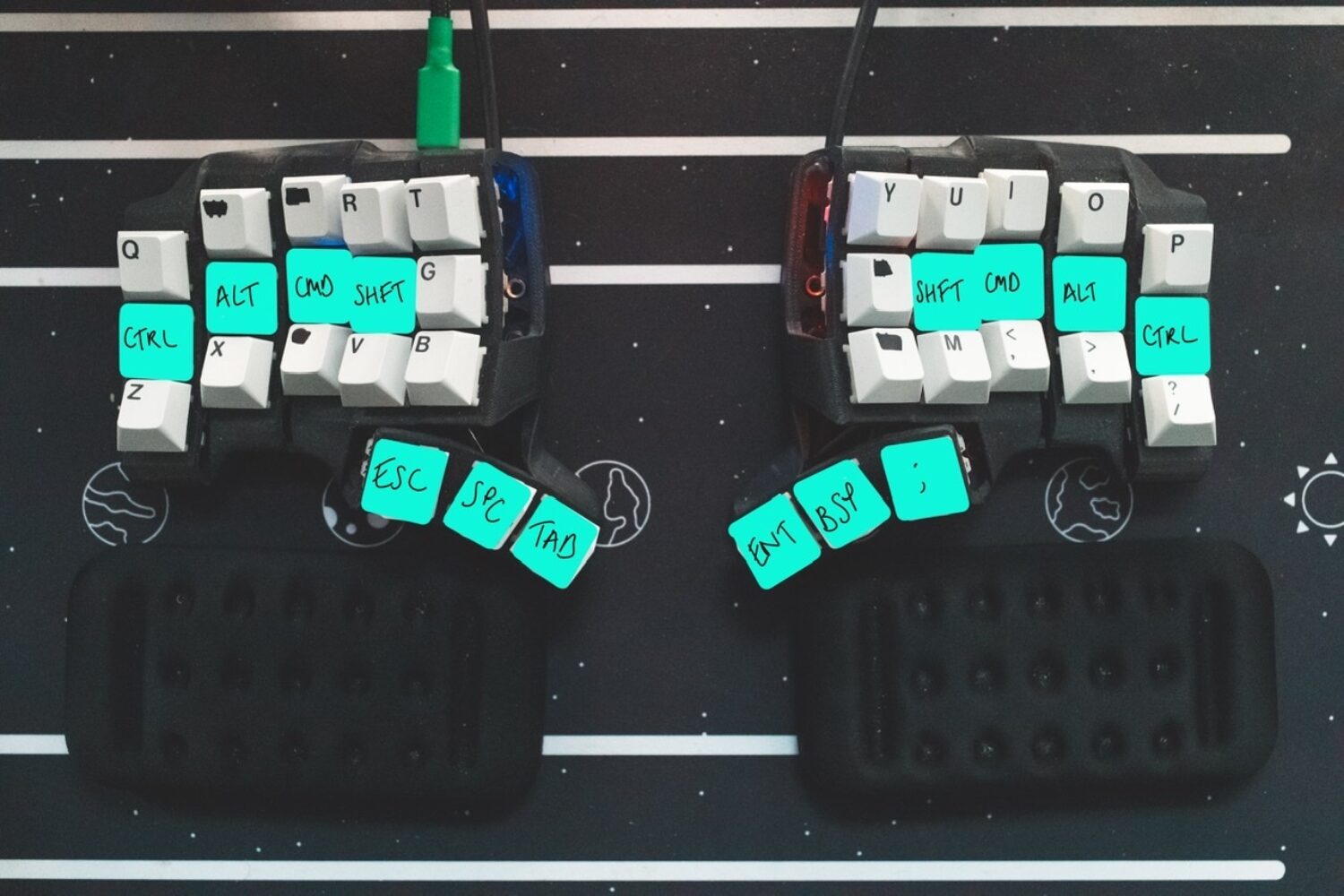 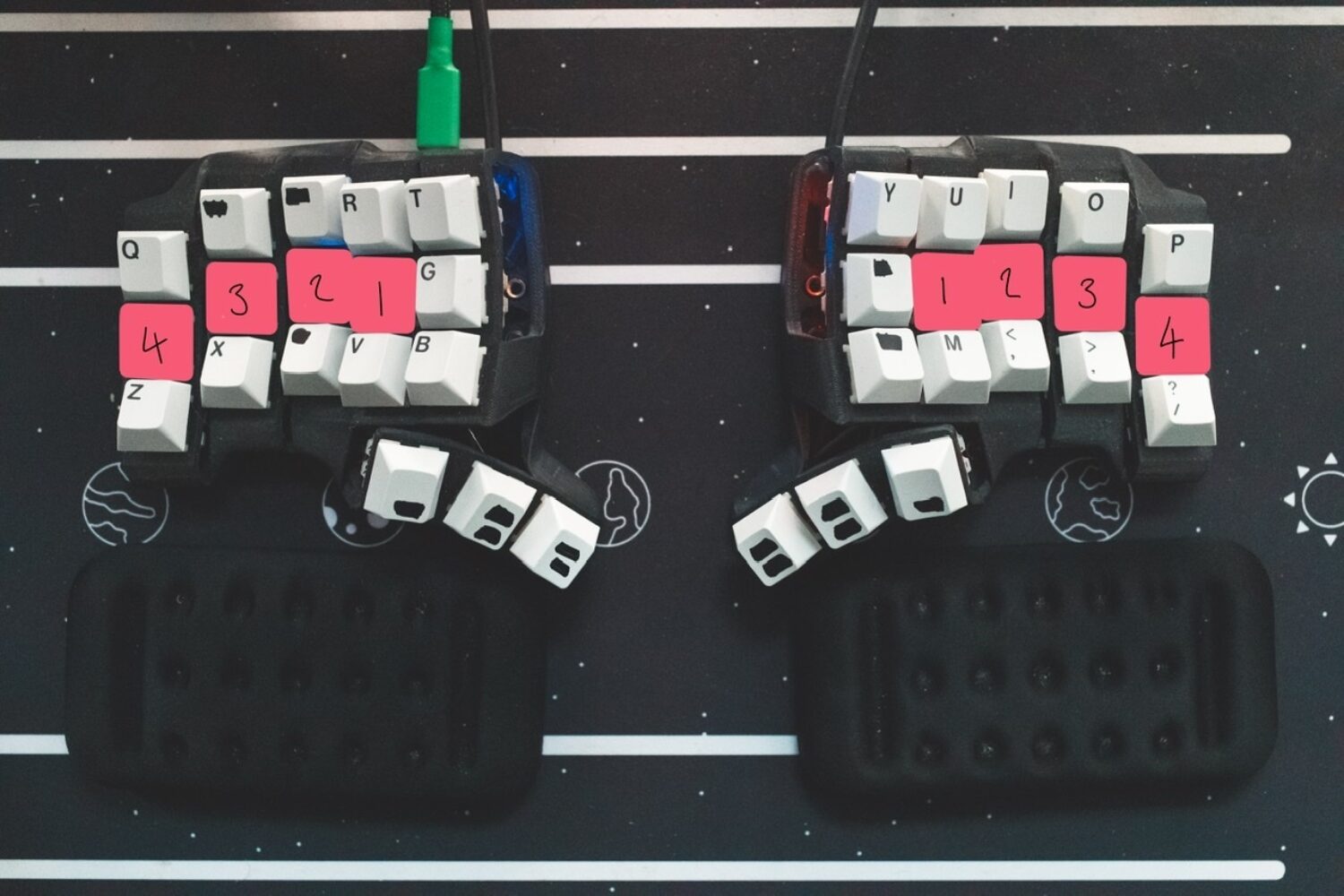 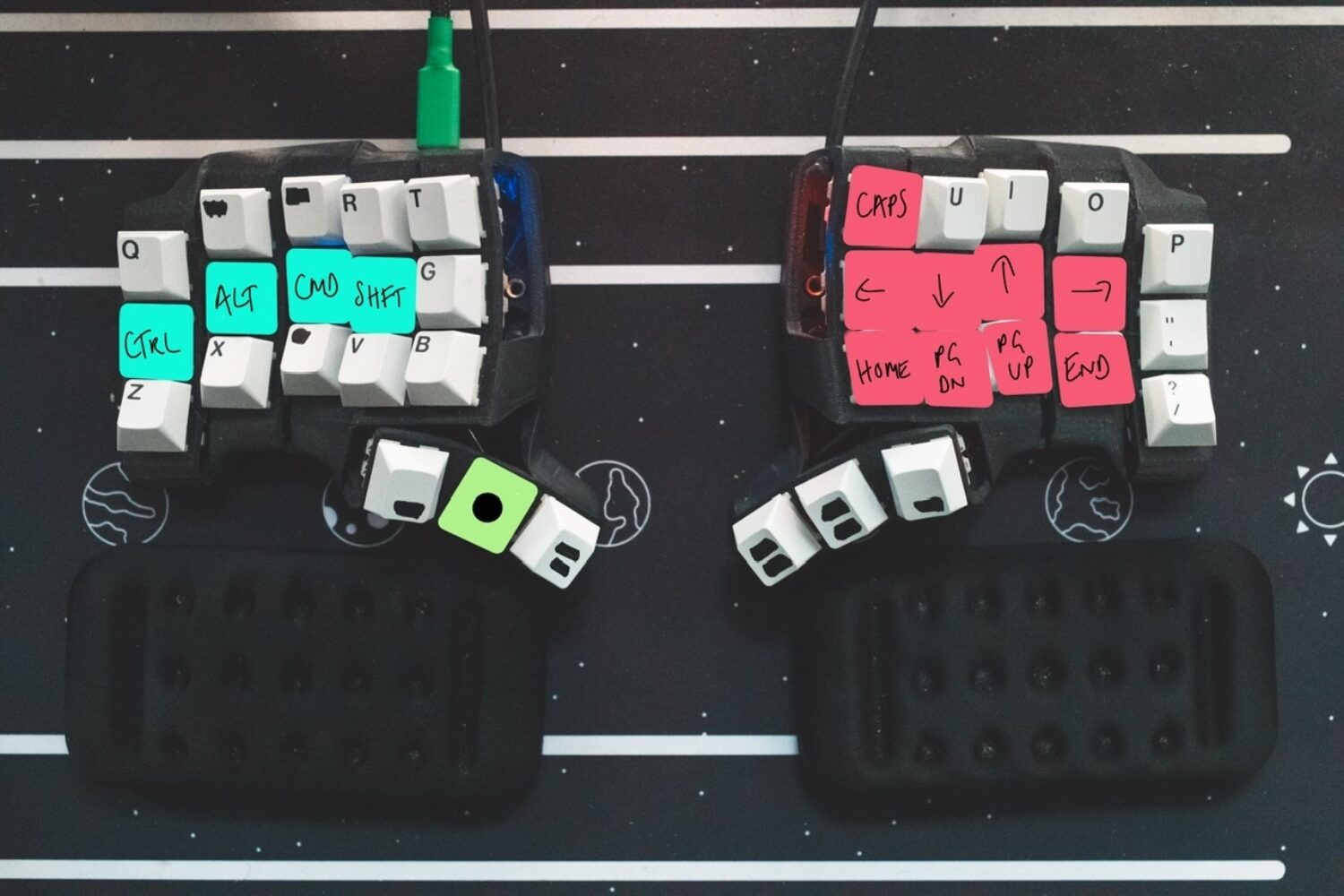 The green key shows that I am holding my space key; I have normal hold mods on my left hand, and my right hand gives me navigation keys I use, and I stuffed caps on here for good measure. 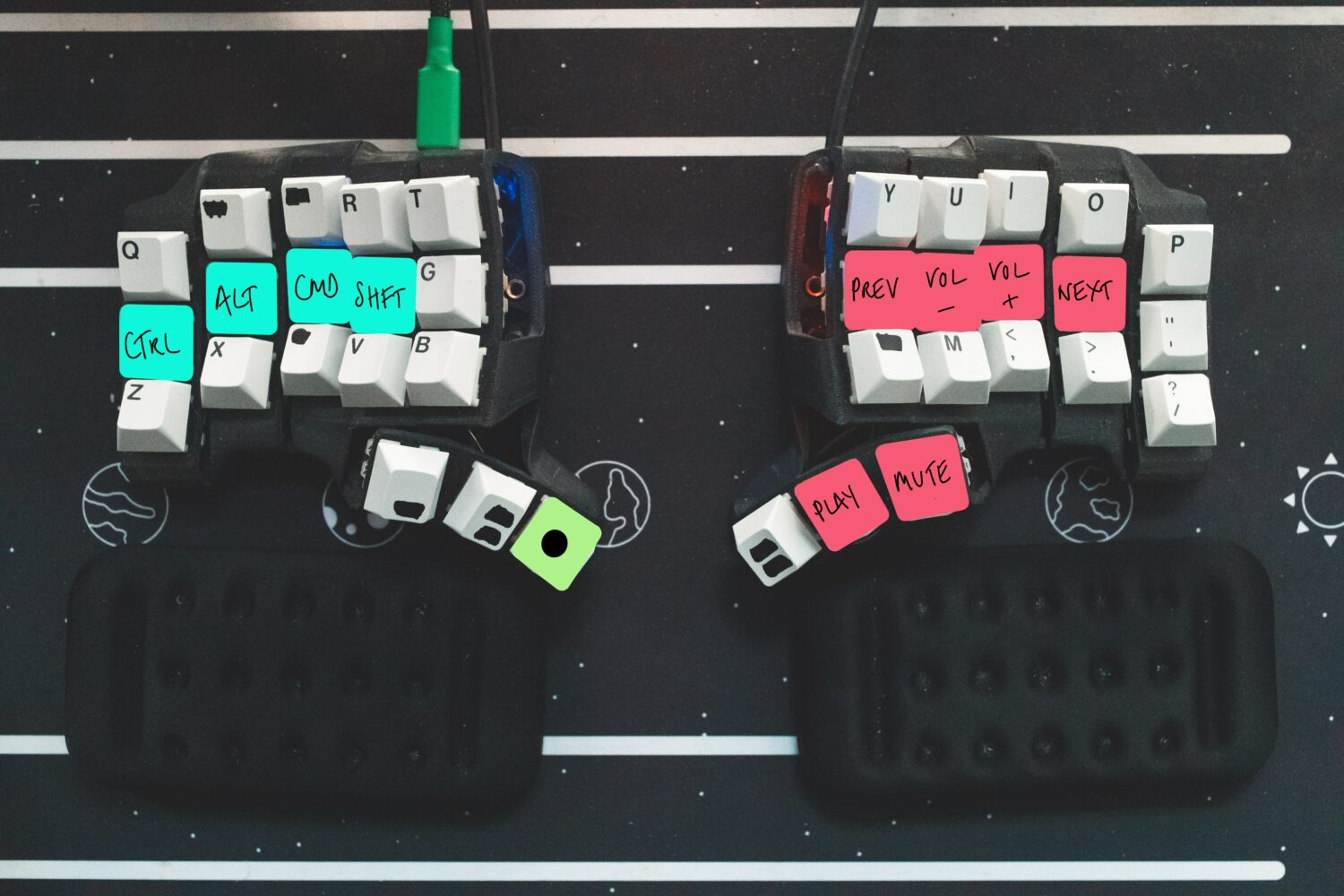 Controls for my music player, accessed by holding my tab key. 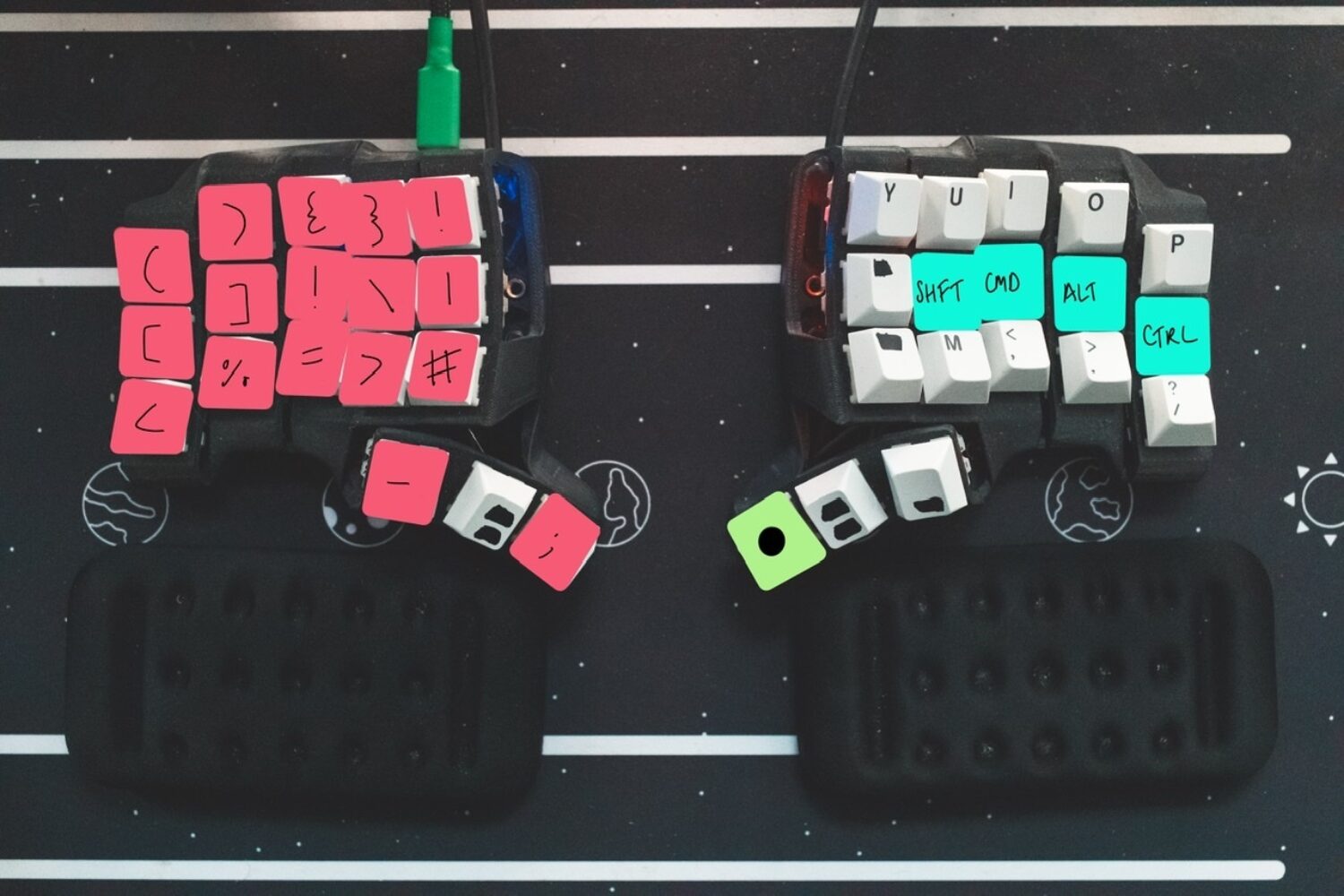 This is set up for common rolls on languages I use most frequently, as well as all the brackets. There is some duplication with numbers to avoid hopping around in certain scenarios - sometimes I need a hyphen and sometimes I need minus. In my head they're different. 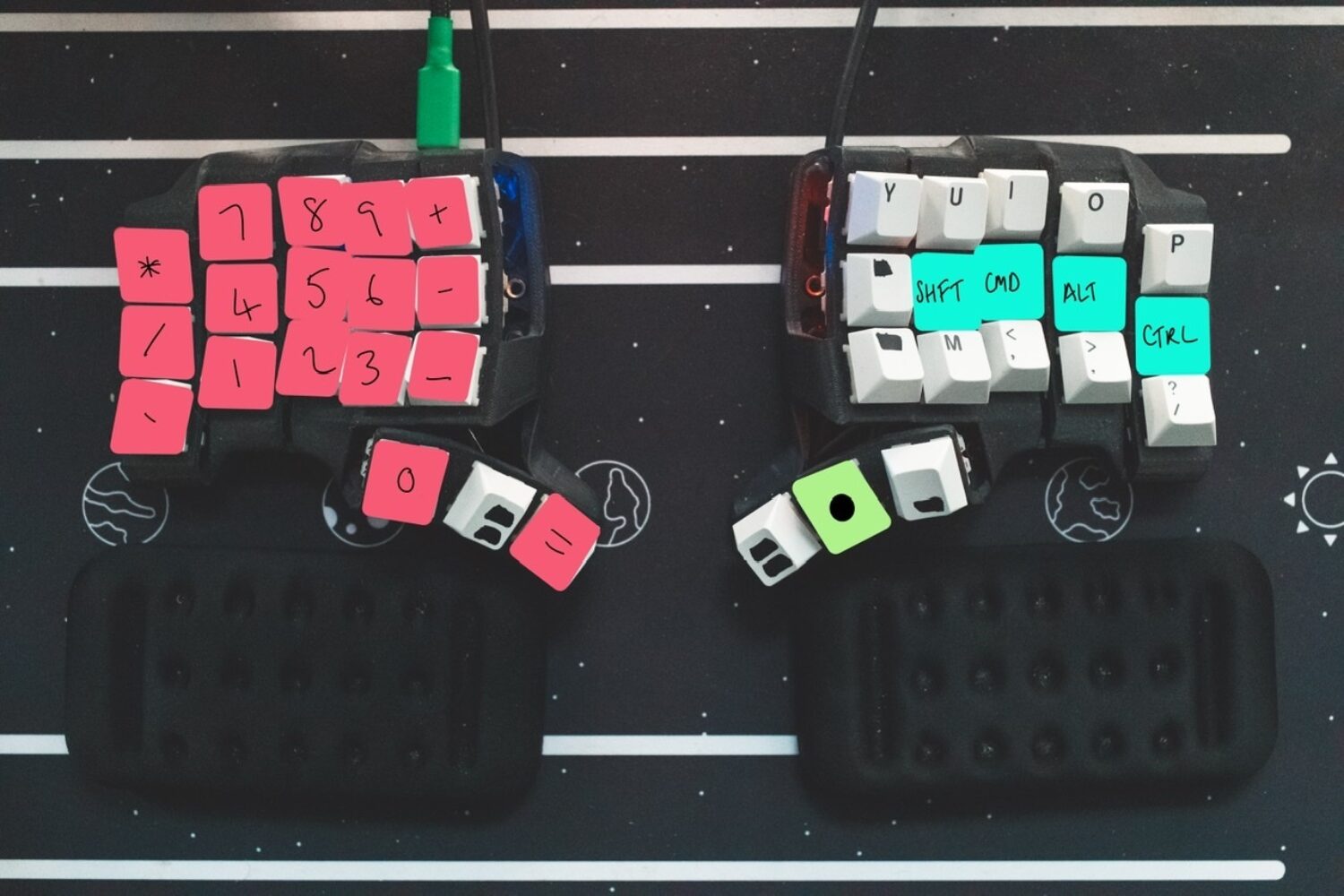 I've found when typing blind, numpads are best for typing numbers. As I have shift there on my right hand, I can easily shift these numbers to get to my punctuation, which works better for a lot of single presses, and then I defer to my sym layer for rolls (which is where you roll over multiple keys in sequence to do common combinations) 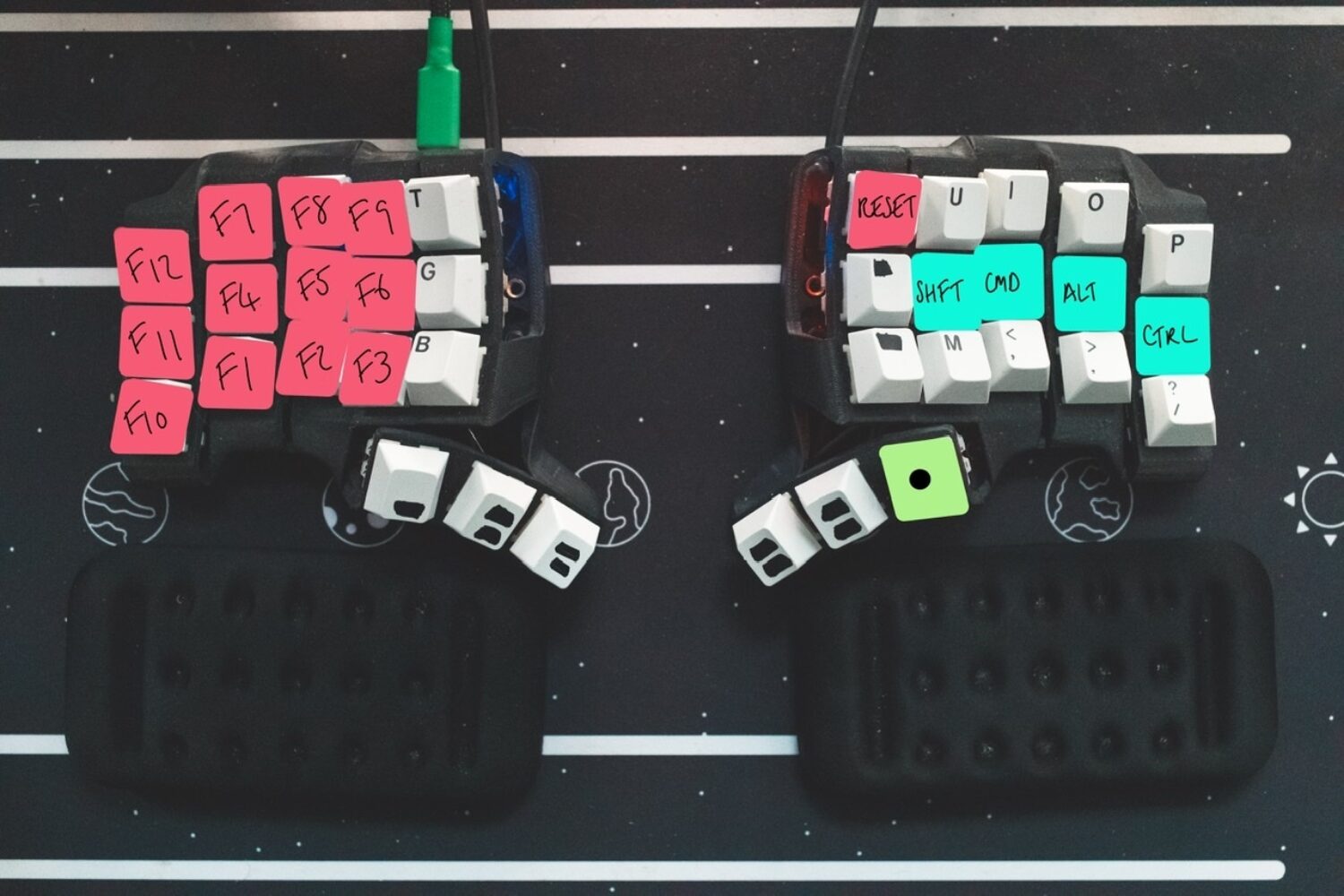 The antithesis of fun. Where I keep all my F-keys, and the ability to easily put my board into bootloader mode to install changes to firmware.

I don't often need F-keys, but when I do, I really do.

And that hopefully explains it. It probably seems like a lot of work, and there's a good reason for that. Maybe it even seems like too much work, but that's really down to the individual.

For me, the reduction in hand movement, improved accuracy and renewed approach to how to make firmware that is truly for me, has been more than worth it. I spend a lot of time making software that works as well as I can, for as many people as I can. It feels strange (and pleasant) to make something that is solely for my use, and it doesn't matter at all if someone else is able to use it. 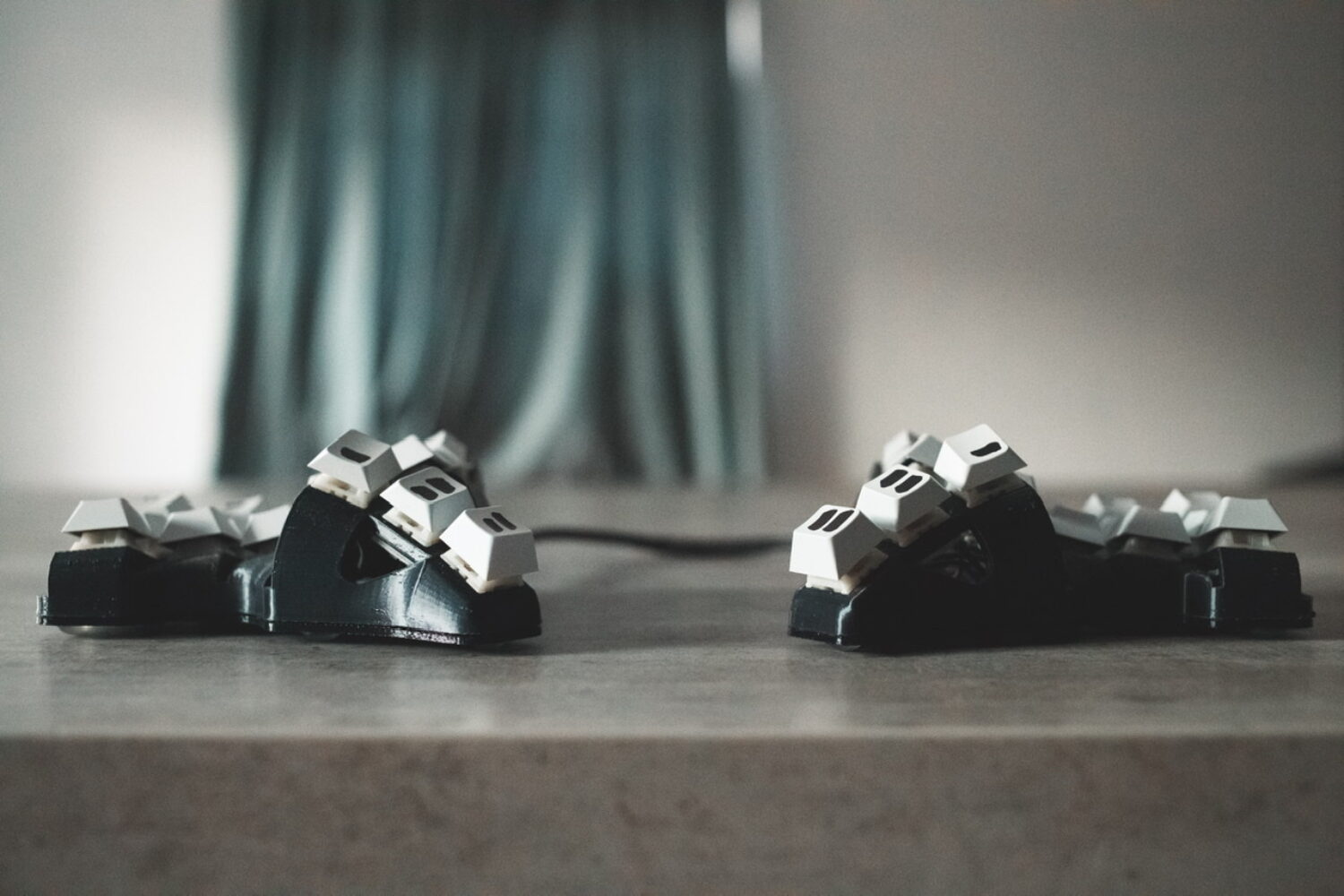 It has a cool silhouette as well