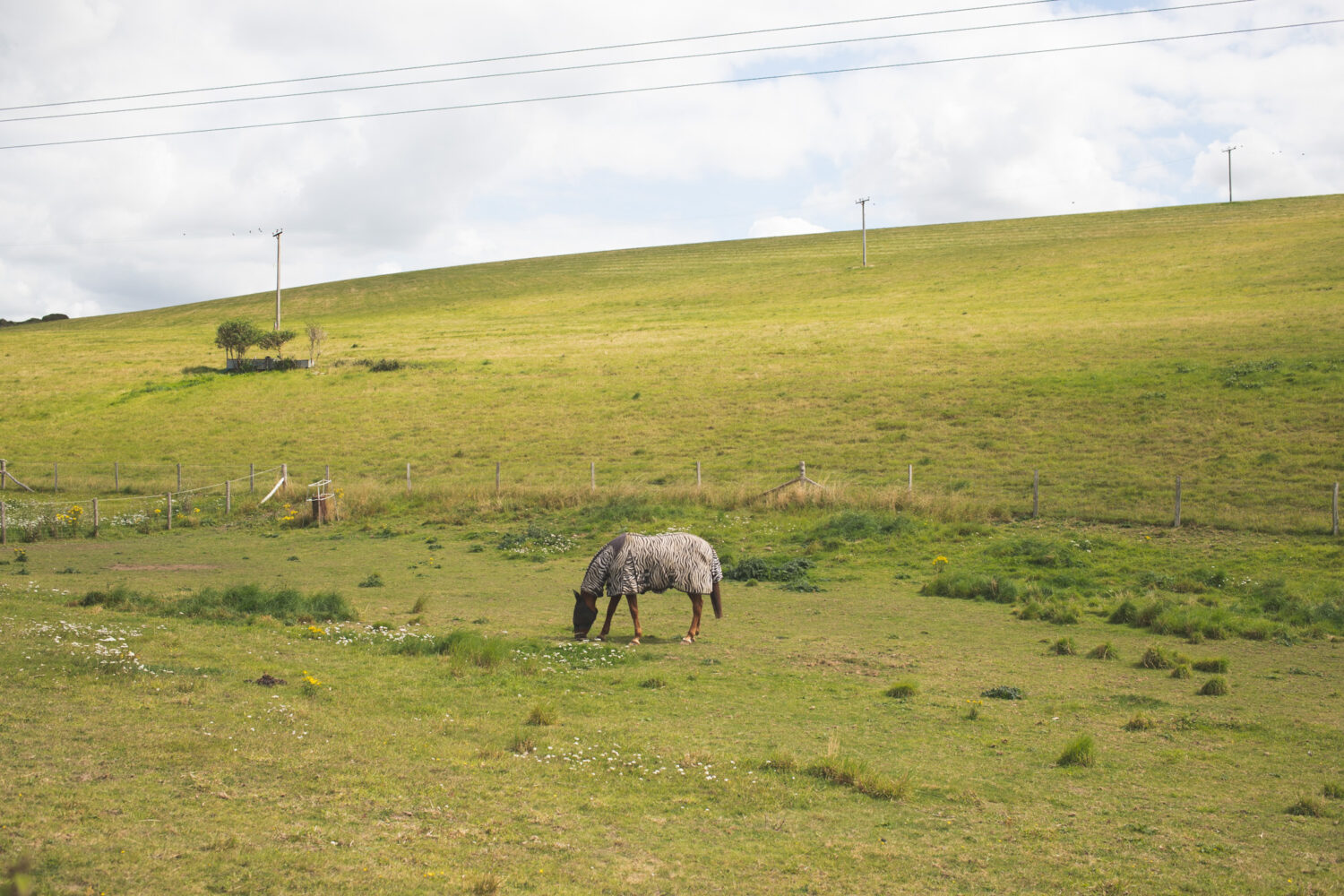 Tabitha asked if this was a shire horse. "He looks pretty confident to me", I replied. Eyes were rolled. It's good being a dad. 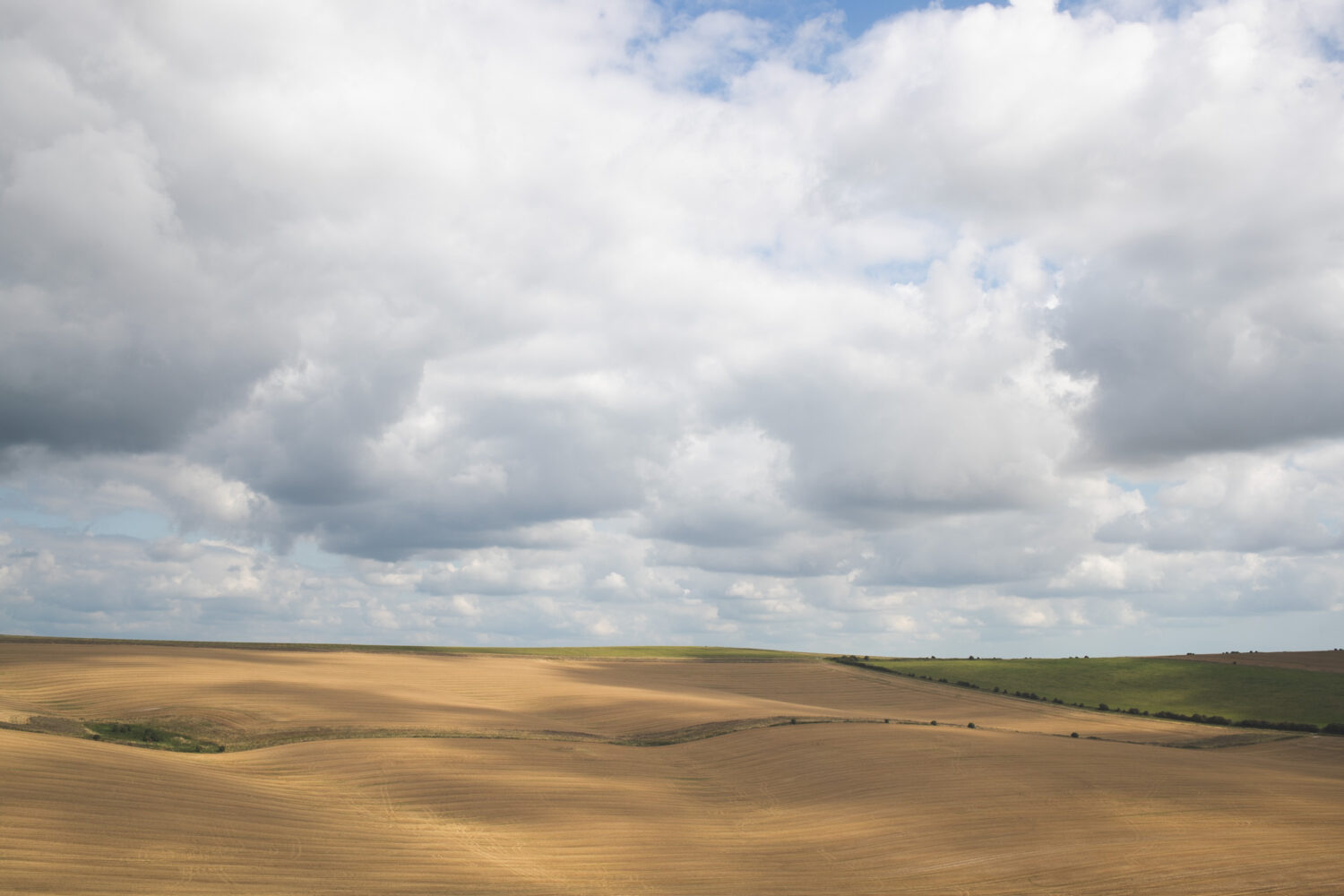 It's times like this that I wish I hadn't crashed my drone. And also that it hadn't become prohibitive to even fly the damn thing. Still I suppose if idiots keep crashing them maybe it's for the best. 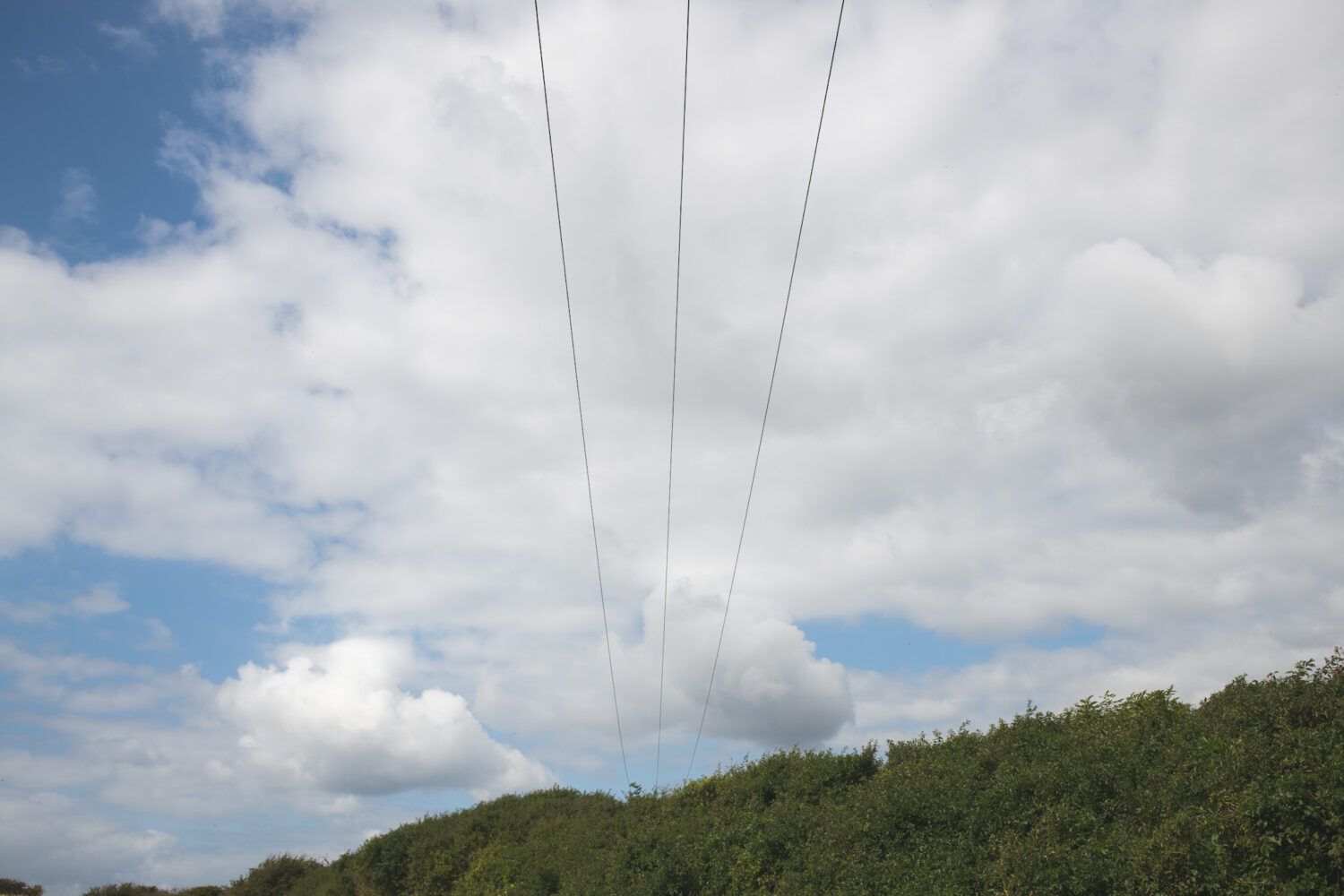 Something about these phone wires emerging from the trees caught my eyes. 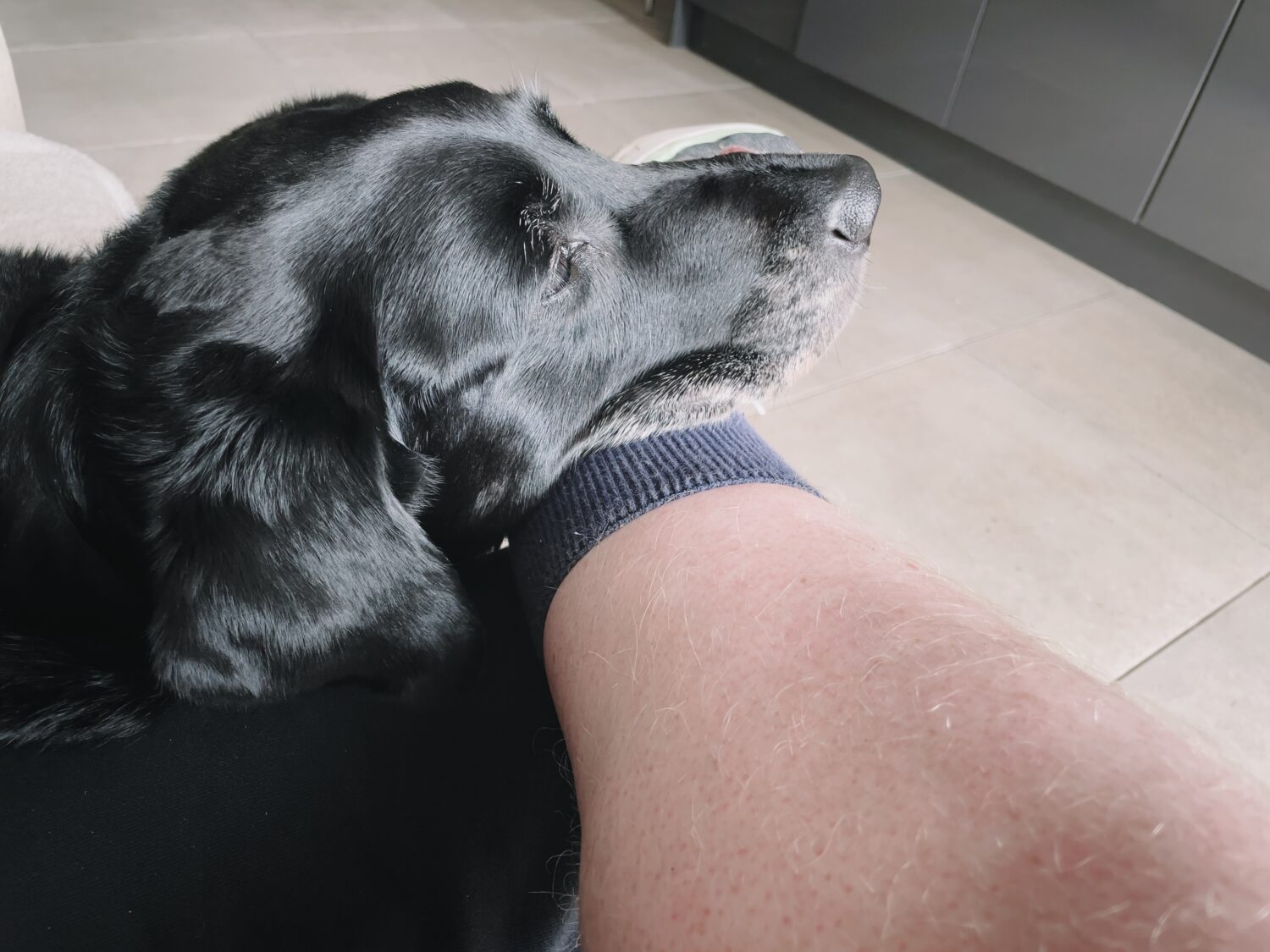 Dog is always happy when I have returned, to serve as his pillow again.

This wasn't strictly a walk to get junk food, but it was a walk that preceded junk food. I think the place we get Indian food from has changed hands. Their bags were different, and the curry I had was brutally hot. I'm into it, I just wasn't expecting it. 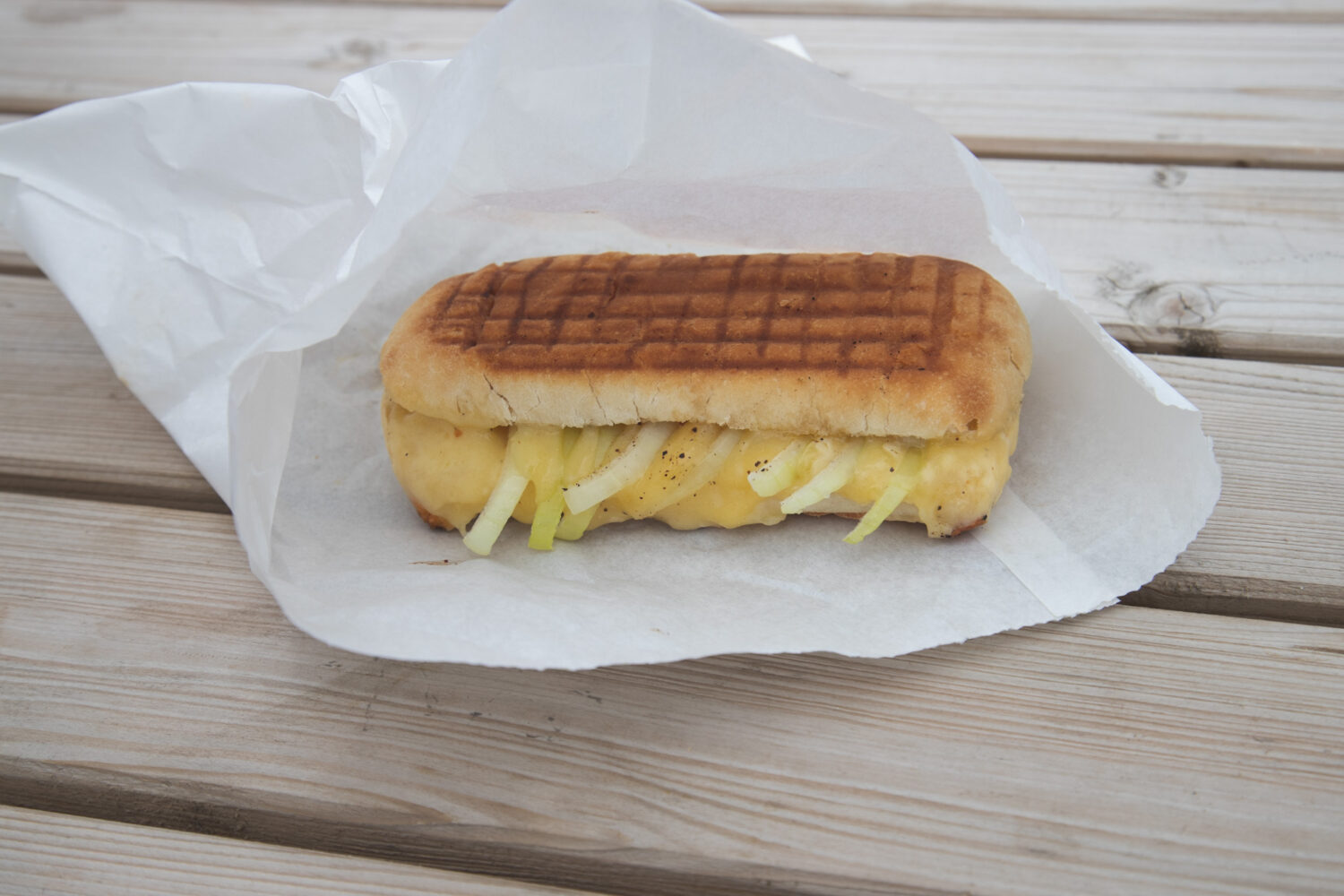 This place at the marina used to be an Italian guy making these really lovely little pizzas that were like calzones but they weren't calzones. They were super nice but he's not there any more. The new people do a passable panino and something called a St Tropez, which Charlotte called "the best sandwich [she'd] had in ages" but she doesn't like sandwiches so I don't consider this much of an accolade. 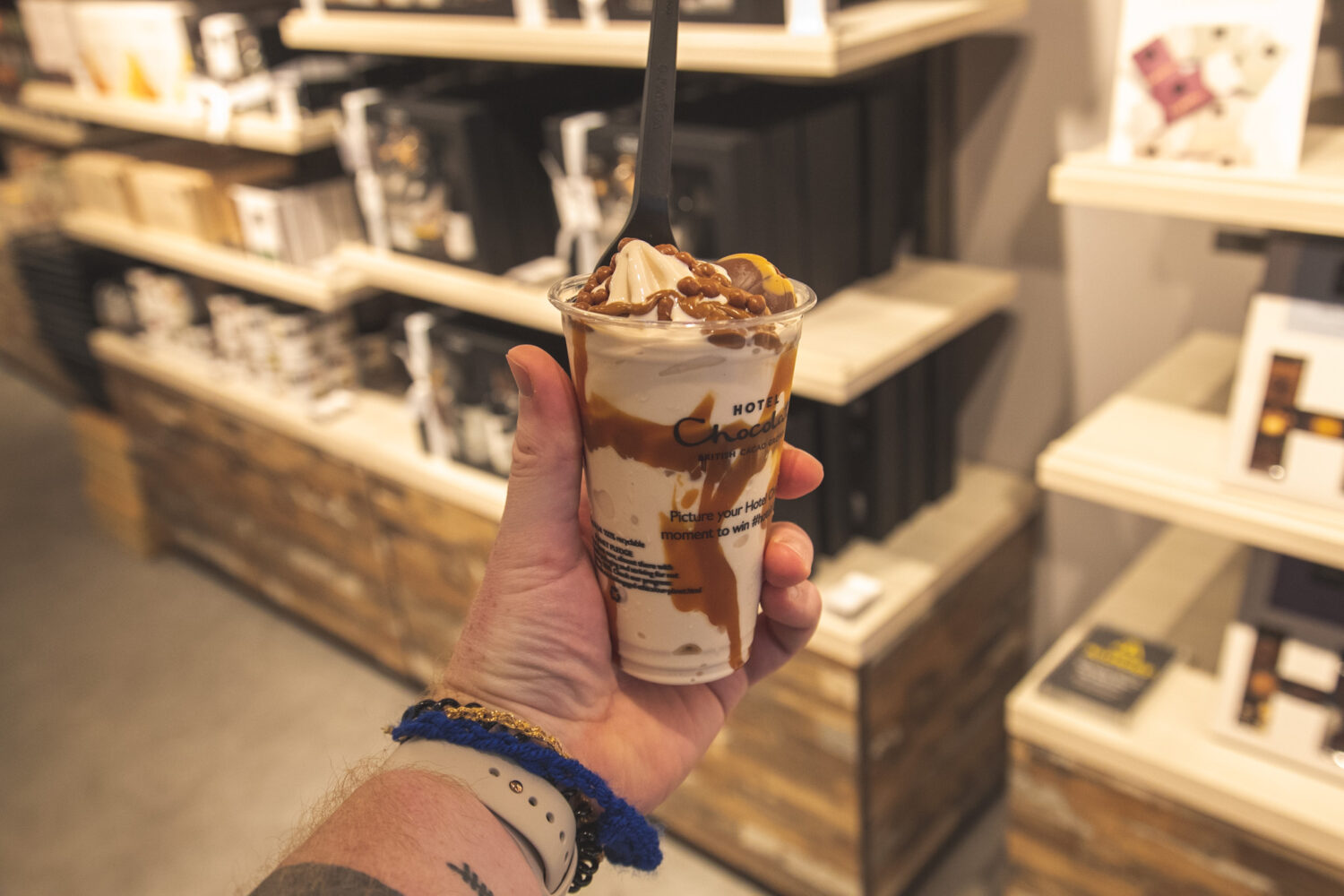 The main event. I trimmed my moustache for things like this. 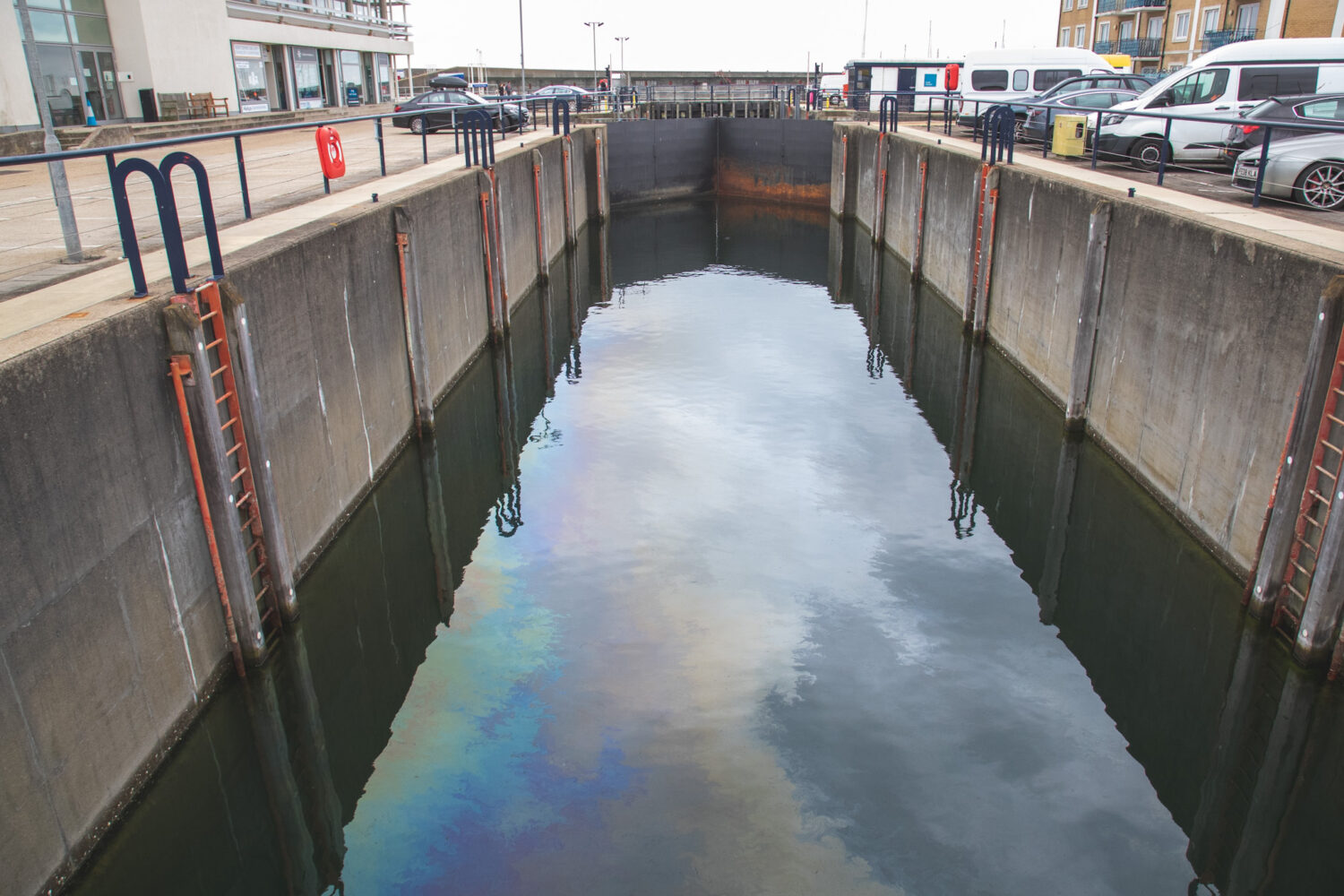 Nice bit of pollution in the water. 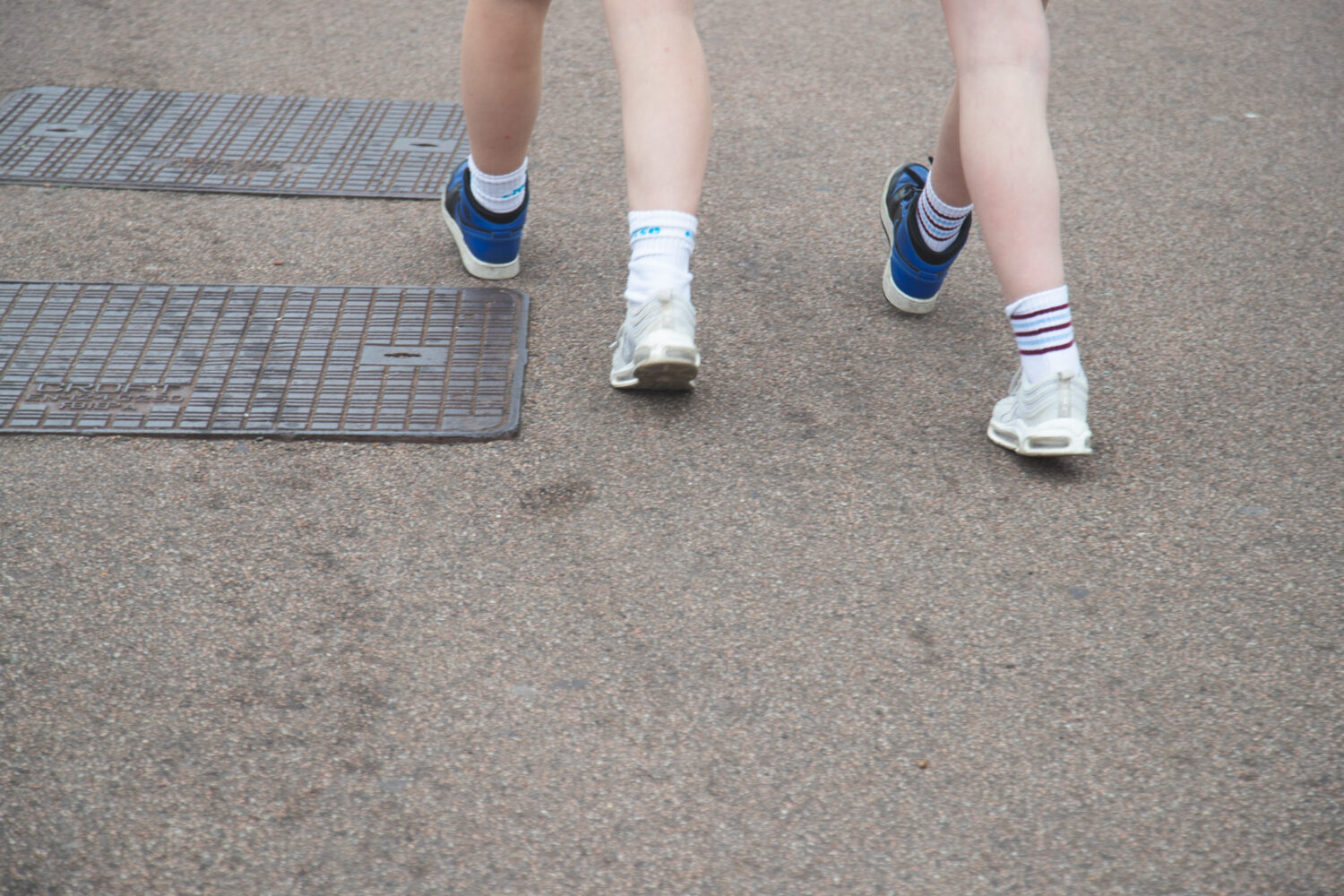 These girls had swapped shoes. So random. 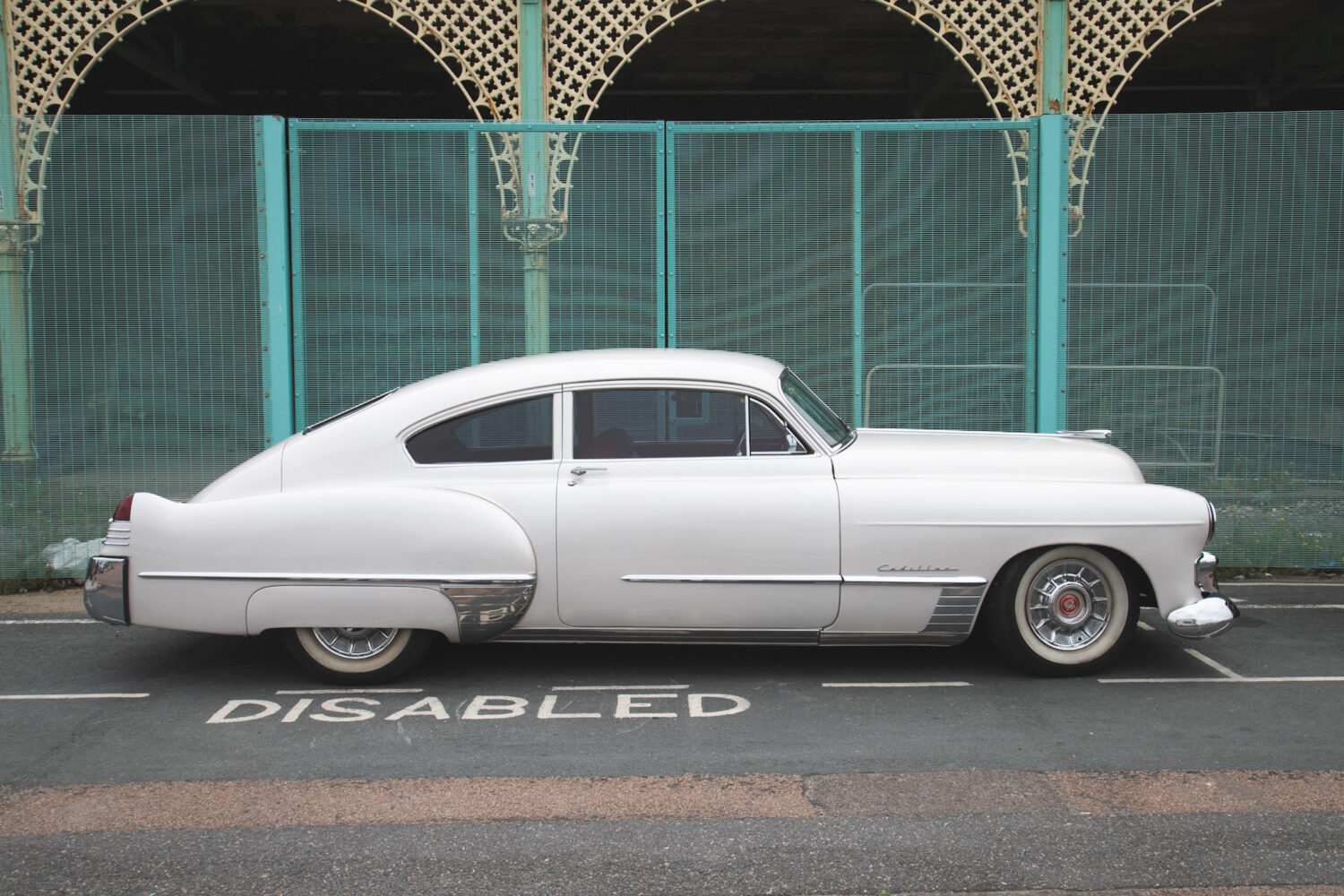 Ridiculous Cadillac. Beats the stupid Lambrettas that have been plaguing the city this weekend. I don't get it, but I do get this Cadillac.

We walked to get a Hotel Chocolat sundae. It was lovely.

We saw so many birds in the rockpools which I also enjoyed. Saw egrets, oystercatchers, herons, cormorants, swans, as well as the usual cavalcade of seagulls, pigeons, crows, starlings. Typically I wasn't carrying a big zoom. I try not to let that disappointment detract from the experience. 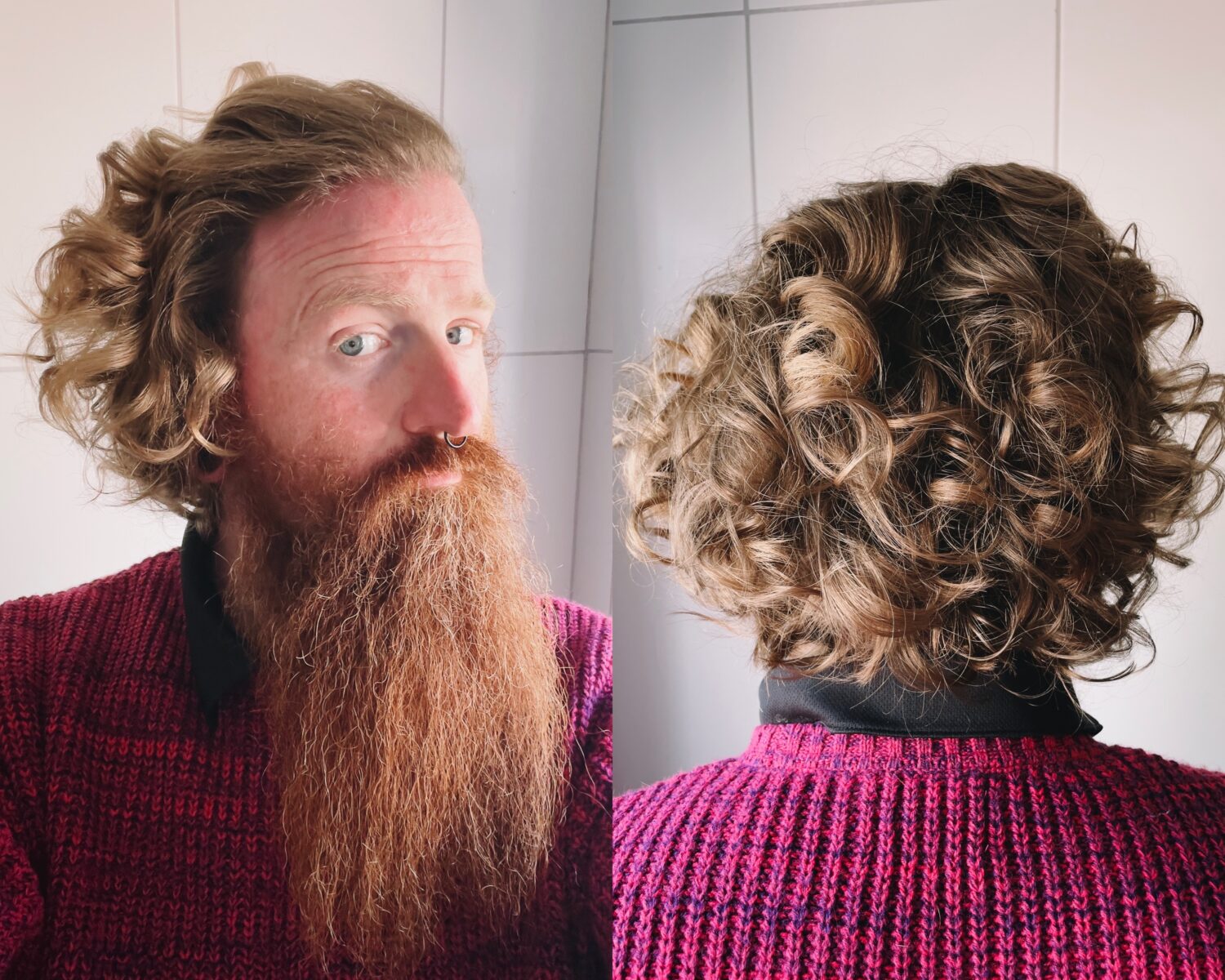 Charlotte wanted to curl my hair. I was against it but she doesn't ask for much and it turned out pretty cool. I have ordered a Dyson Supersonic because my hair is ridiculously thick and it takes about 15 minutes to blowdry or about 4 hours to just drip dry. That's too much of my day. I watched a review from a pro hairdresser who seemed like she wanted to hate it, and ended up loving it. It was quite convincing; that's a good enough review for me.

I've been listening to the new Lorna Shore. It's like an evolution of the Deafheaven sound, which is welcome now that Deafheaven seem to have abandoned that in favour of whatever the hell they're doing now.

I watched this video of a guy from Vice at the Westminster Dog Show whilst on acid. It's maybe one of the funniest things I have ever seen, but I also thing I was just in a very giggly place when I saw it, so your mileage may vary.

Finally got round to watching Fantastic Fungi properly. I'm not impressed. It seemed to lack focus and, although it touched on some super interesting areas, it didn't go into enough detail to hold my attention well. So many of these "look at the benefits of recreational drugs" things come off as "I just want to do the drugs I want to do" to me.

We also watched the Saqqara thing on Netflix. I love Egypt but I fell asleep so I need to finish it.